The 2019 UROC (Ultra Race of Champions) was held in the Blue Ridge Mountains of Virginia.

We drove down the day before the race for packet pickup.  The views around the area were amazing, and there were a few overlooks to pull off and check out. 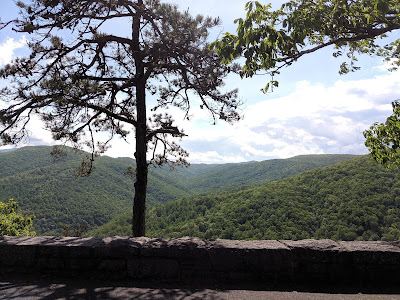 The packet pick up was the same location as the start / midpoint / finish of the race.  It was located at the Skylark Nature Preserve, also know as 12 Ridges Vineyard. 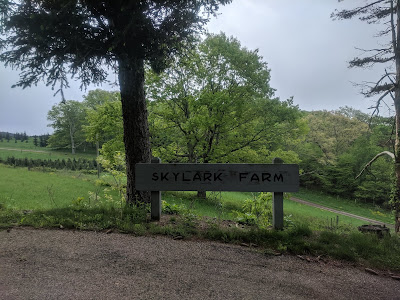 Entering and exiting the location was a little tricky, because it is a very narrow one lane road.

After arriving at the parking area, there was a good hike up the hill to get to the packet pickup area.  But seeing that you are probably there for an ultra, you should be OK making it up the hill.  (your family and crew may feel differently) 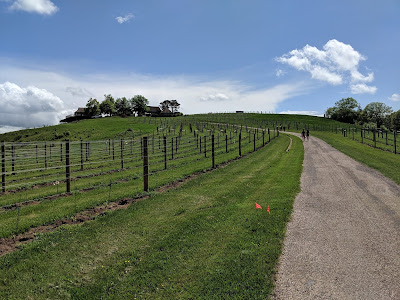 At the top of the hill was the start / finish line and the packet pickup location. 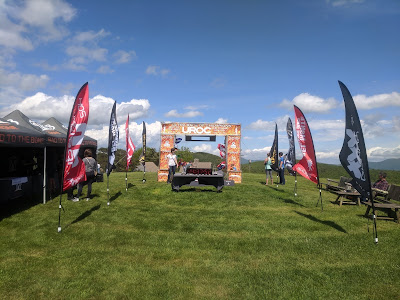 I got my shirt and bib and headed off for the night.

The next morning we met at the same location as packet pickup. 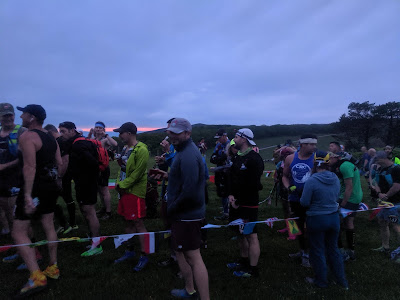 The race began at 6:00 am.
The sun was just starting to come up, so there was no need for the head lamp in the morning. 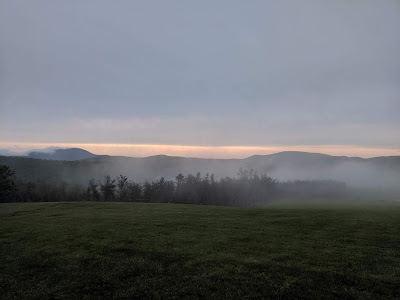 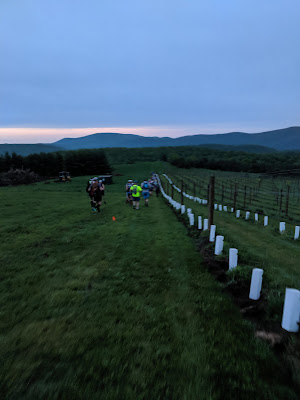 The course was broken down into 2 50k courses.  The 50k and 100k split shortly after we left the start line.  The 50k went left to the 50k course which we would be doing later, and the 100k went right for an out and back. 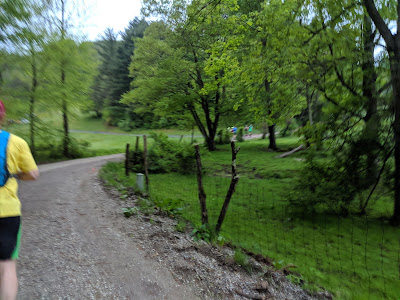 After about a 0.75  mile run though the Skylark farms property we hit a dirt road, and continued down it around 2 miles until we hit a paved rode. 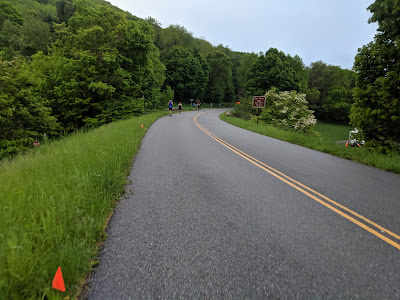 We traveled the paved road for about another 2 ish miles.  We hit the first aid station at the end of the paved road, then it was single track for the rest of the out and back.  This worked great to spread out the races before we hit the single track. 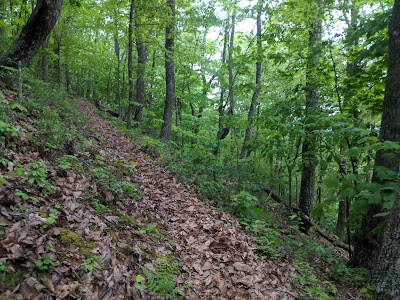 There weren't a ton of markings on the trail, but there also weren't many places to go.  When the trail would split it was marked pretty well. 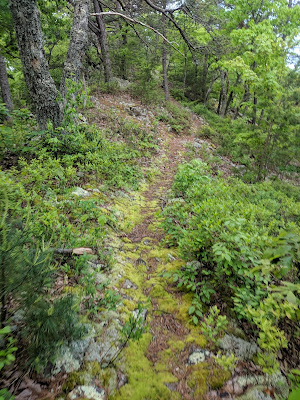 The trails had a few smaller elevation changes in the beginning then we got into some steep short ups and downs. 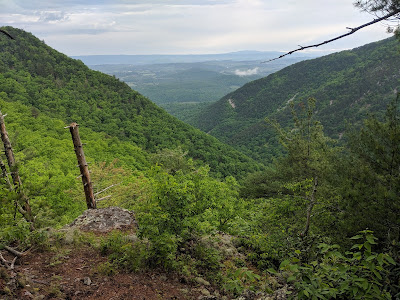 The views were amazing.  The trail seemed to go out the top of the ridge so there was a pretty good view the entire first 50k. 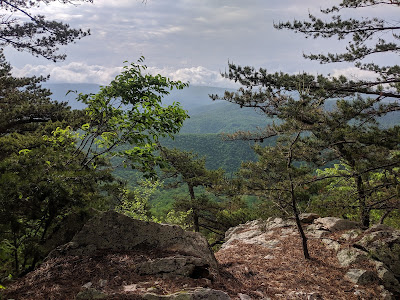 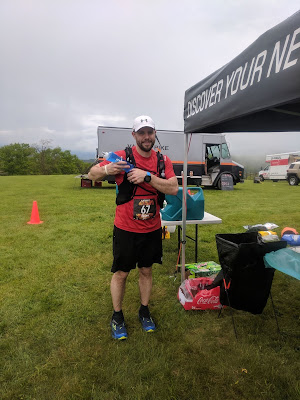 After leaving this aid station, we headed out on the same course the 50k participants ran earlier. 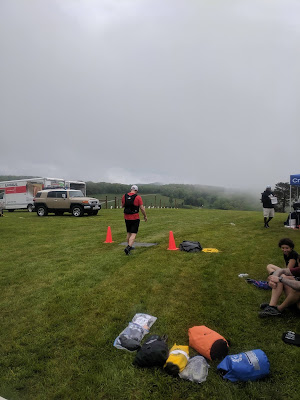 This half of the course started down the hill to the parking area and back through the other side of the Skylark property. 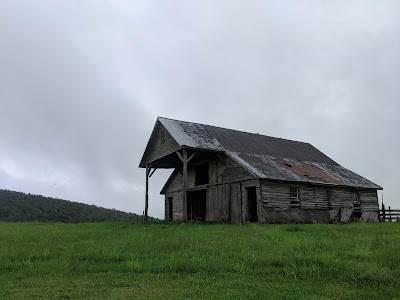 After around a mile we hit the Blue Ridge Parkway.  We continued on the blue ridge park way for around 1.5 miles. 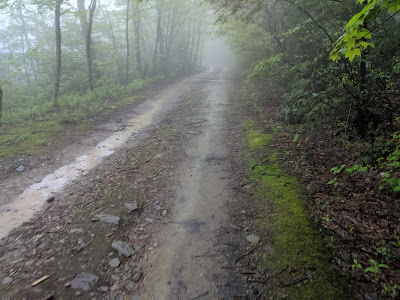 Some of this half of the race included a dirt road.  It was raining pretty hard at this point so there was a small river running down it. 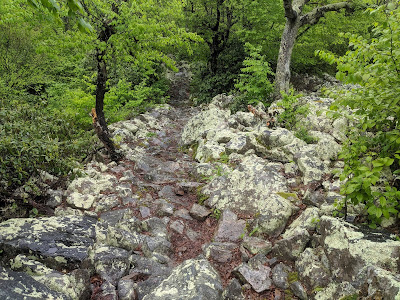 The second half of the course, the single track, seemed a little more technical with a few rock gardens throughout the trail. 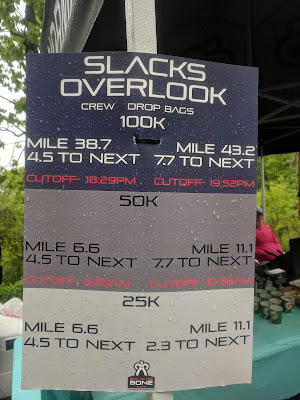 The aid stations were very well stocked, and they were setup so you passed through a few of them twice.  This was nice for crews so they could meet there runners twice without driving to another location. 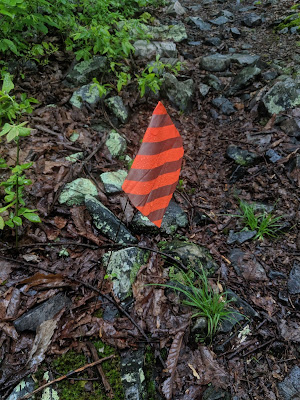 The second half of the course was marked with a lot more flags.  They were nice when it started getting darker.  Most of them also had reflective strips. 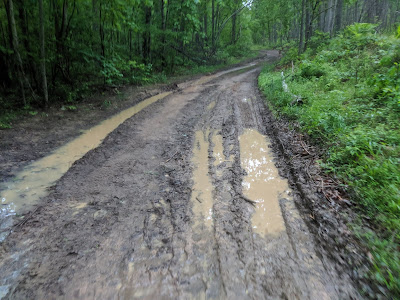 There was about a 1.2 mile out and back down a dirt road that we went to the end and marked our bib, and returned to the aid station.  After this there was around 5 miles to the next aid station.  It was mentioned at the previous aid station several times that it was a LONG 5 miles.  They weren't kidding.  At this point we were 50 plus miles in to the race and those 5 miles ended up being one of the steepest and longest climbs of the race. 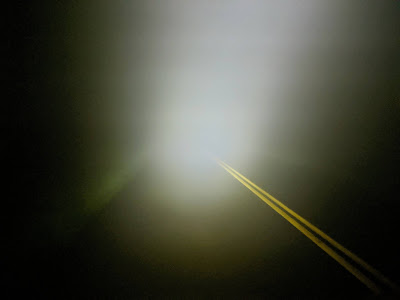 On the way back to the finish line it started to get pretty foggy.  Luckily the turns were marked well and they had cars and volunteers where we needed to turn. 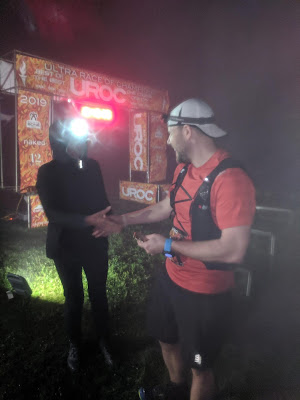 After getting back through the Skylark grounds we headed up the final hill to the finish.

This was a great race with a good mix of terrain. There were a few challenging hills and the weather definitely added some difficulty, but the views were amazing!