This was my wife and I's second GORUCK Star Course.  The first was the 2018 Philadelphia 50 miler. 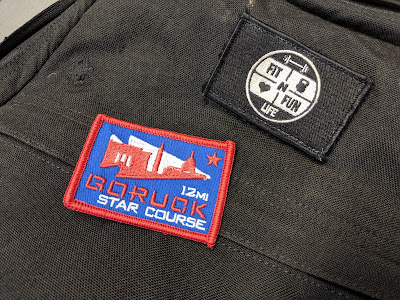 First off, this course was in Washington D.C.  This was our first D.C. event, and we parked outside of the city and took the metro in.  This worked very well for us, parking was easy and we were able to get fairly close to the start point. 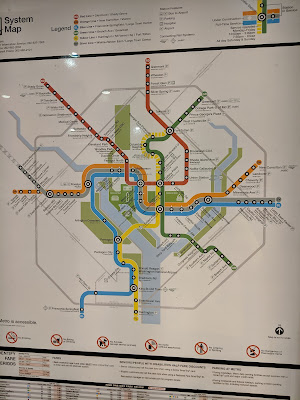 After getting off the Metro we headed to the start point.  The start point was at Georgetown Waterfront Park. 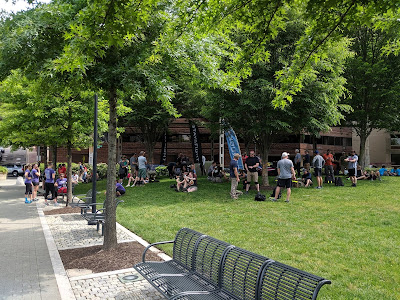 It was easy to find the GORUCK start point, they had several tables setup with GORUCK flags.  All the GRTs with rucks on their back was a good indicator also. 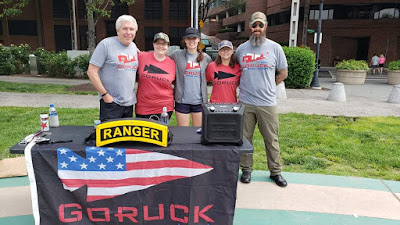 Cadre Igor was leading the 12 miler.  We all signed our teams in and the team leads were asked to meet with the cadre to get through part of the admin portion.  Next we were given all the points and instructed to layout our routes and check them with the cadre.  We were also given time to do this before the official start.  This was much different than our Philly 50 miler.  There we were given the points and the clock started. 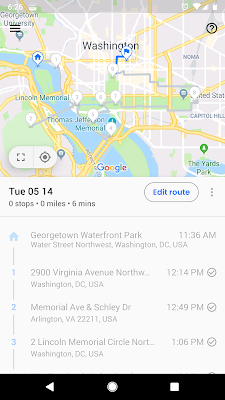 This time we used the Circuit app instead of the Road Warrior app which we used for the Philly 50 miler.  The Circuit app worked great, and I think it is easier to use.  It also had a few days of a free trial with unlimited points so we didn't even have to pay anything.  It also linked to Google maps, so we could use it for directions from point to point. 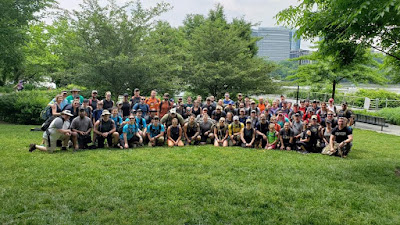 Once it was close to the start time we all gathered together for a group picture, and were sent off on our journey. 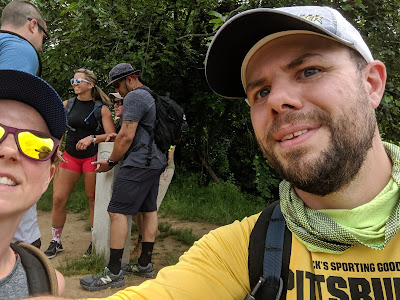 The first point in the route we chose was mile marker 0 of the C&O Canal Towpath.  Being this was the first point on most team's list there was a line and not much room to get a picture.  So we did the best we could so we could continue to move on and not waste time. 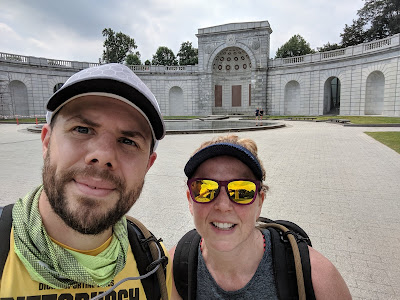 The second point was the Women's Memorial. We snapped a quick picture and quickly headed on. 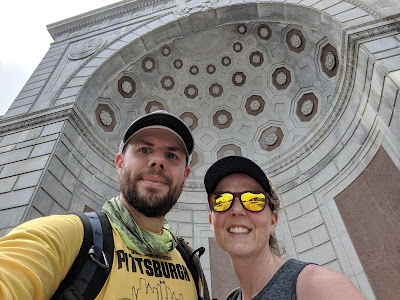 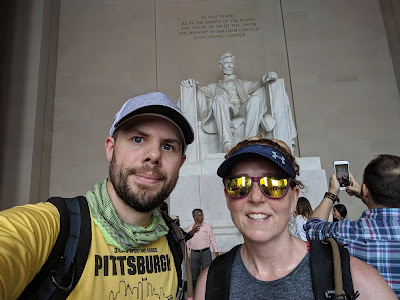 Our third point was the Lincoln Memorial.  A lot of the points were much more crowded than when we were in Philly.  Plus with the 12 miler we were out in the middle of the day so many of the points were quite busy and it made it a little more difficult to get in and get the photos. 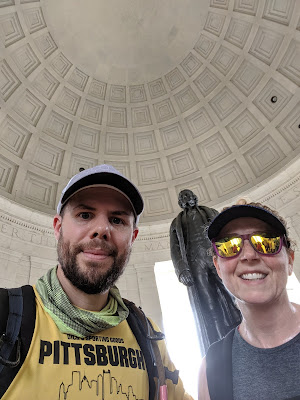 Our fourth point was the Jefferson memorial.  We quickly found there were a lot of locations we could cut corners and cross open spaces to shorten the route. 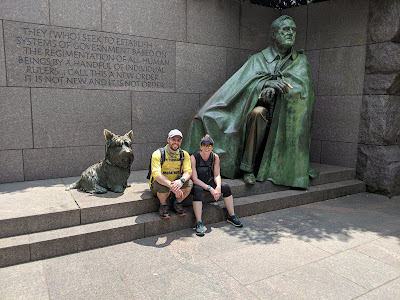 Our fifth point was the Franklin Delano Roosevelt Memorial. 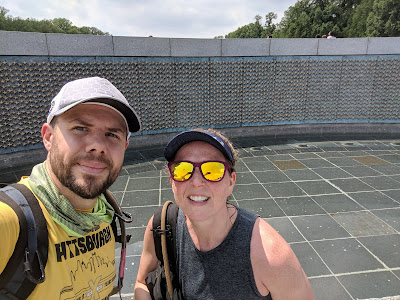 The sixth point was the World War 2 Memorial.  A nice thing about the D.C. course was that many of the points were easy to find and everybody knew where they were, because they were so iconic.  Also, most people in the area were there to visit the same sites.  It was a little more hectic because Georgetown had graduation ceremonies that day too, around the same time that we started our event. 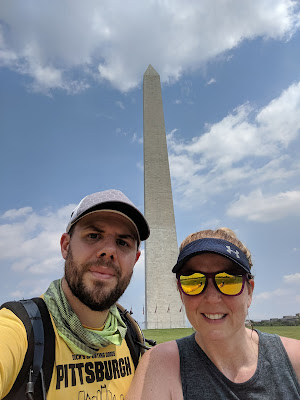 The seventh point was the Washington Memorial.  This was probably one of the easiest to find because you could see it from a long distance.  Many of the D.C. points you could see from a distance, which helped out a lot. 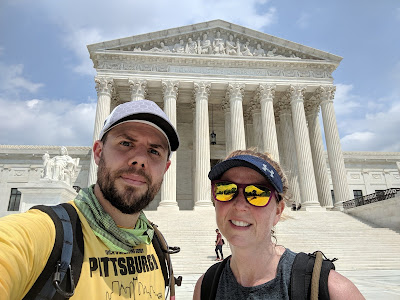 Our eighth point was the Supreme Court of the US.  Overall, the D.C. course was very flat, with the biggest hill being the walk up capital hill to this point. 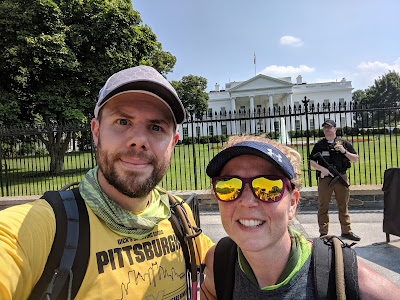 Our Ninth point was the White House.  Then we were off to the finish.  It was getting really hot out, but we continued on.  From start to finish there were 11 way points. 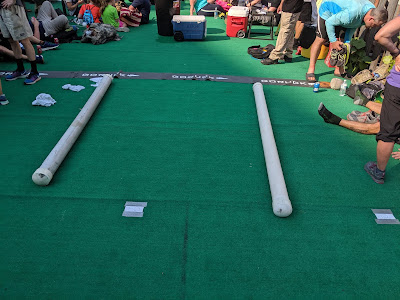 The finish was at Balance Gym on the roof top, so there were quite a few stairs until you got to the top.  The timing was also planned out well so the 50, 26.2, and 12 mile finished around the same time. 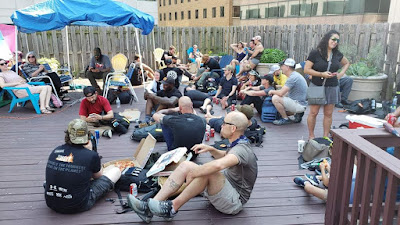 After finishing they had pizza, donuts, beer, and water for everybody.  It was was a good location to hang out and wait for the other teams to finish up. 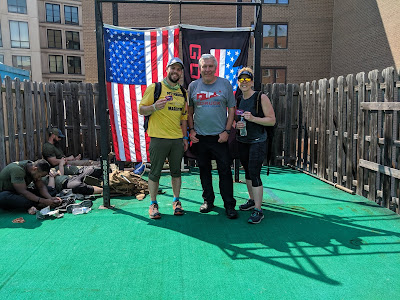 We ended up being the first 12 mile team in, so we got to see a lot of other GRT's come in for the different distances.  We also had the chance to meet up with quite a few of the GRT's that we have met over the years.  The D.C. Star Course had many more participants than the Philly 50 miler we did.

We highly recommend the 12 mile Star Course.  It was a lot of fun, and there seemed to be more points per mile.  So we didn't have to suffer through the long out and backs like we had for the 50 miler in Philly, to get the total 50 miles in.

This ended up being a quick tour of D.C. and some of the most popular attractions.  We also ended up with a great photo gallery of us in front of all the local attractions in our Instagram account that was created to track our event.
I would definitely recommend this one for fun.  We didn't take it too seriously, but we also kept moving because it was so hot out.  It was a great event.

Posted by Brian Gardner at 3:34 PM