On March 17, 2018 a group of us attended the GoRuck St. Patty's Day light event in Pittsburgh.  We met up and carpooled with several people so that it would be easier to park in the city, especially on St. Patty's Day.  The city is always crazy this day with the parade and tons of stuff going on in the city.

My husband, myself and two of our friends who've done a GoRuck before went down, along with 3 new recruits.  They wanted to see what it was all about without committing to a Tough or an event that was more intense.  They picked a great event to try it out.

We parked and went to the meet up location just outside of The Point downtown.  We saw lots of new faces and lots of familiar faces as well.  It's always nice to see those familiar faces.  Here we are before we started the event, fresh and eager. 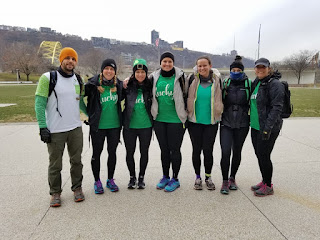 Once the cadres showed up we lined up to have our rucks checked for necessities (license, weight, and $20 in cash).  We were also graced with the presence of some drunken St. Patty's Day kids who were enjoying the festivities downtown and happened upon us.  They asked some pretty hilarious questions, stumbled around a lot, and all in all made it pretty entertaining for all of us.

At this time we collected rolls of quarters, nickels and dimes for the service aspect, which is always part of any event.  They were put into an ammo can and carried during the event.

Our first task in true GoRuck fashion, we divided in to 2 teams and attempted to complete the ranger push-up circle.  The first team to "push-up" wins.  In a nutshell, you lay down on your stomach, hook your ankles/legs over the shoulder of the person behind you and your hands are on the ground ready for the push-up.  You create a giant circle and then a leader counts to 3 as you push up together.  Below are some photos of our hilarious attempts.  You really do get to know your teammates this way, up close and personal! 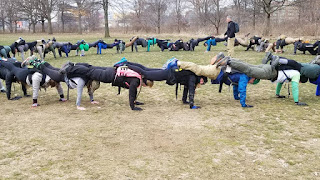 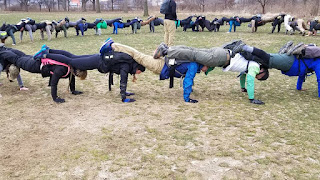 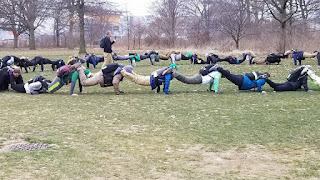 Following the ranger push-ups we moved on to another GoRuck staple, the tunnel of love.  Basically you just line up next to one another in a high plank/down dog position, while each member in your row crawls through your "tunnel".  For some, holding the position is hard, for others it's the crawling.
Next we did some lunges, squats, duck walks, crab walks, and some fireman carries.  The PT really wasn't bad this event. 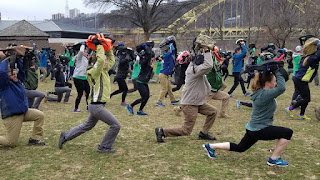 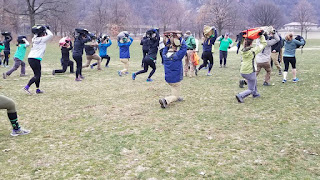 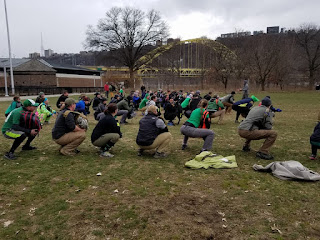 We then picked up our rucks and started walking towards the North Shore, until we reached the Law Enforcement Officers Memorial.  One of our own GRT's, who is a Pittsburgh policeman, told the story of a friend who lost his life in the line of duty.  We went to visit the memorial and then we were on our way again, heading towards Station Square. 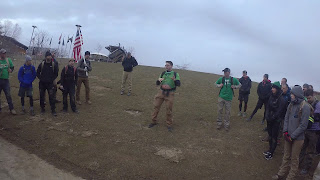 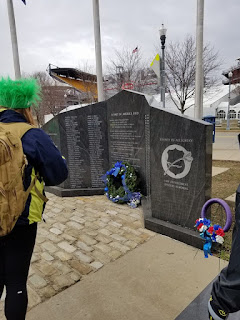 Along the way we had some "casualties", log carry with a team full of women doing the work (get it ladies!), the team weight (which was a chain link shamrock), and of course extra rucks to be carried.  Our newbies stepped right up and helped with all of these.  I was super proud to see that. 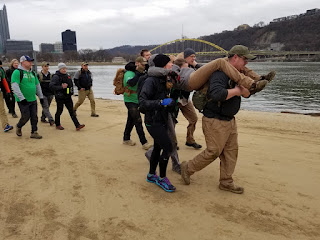 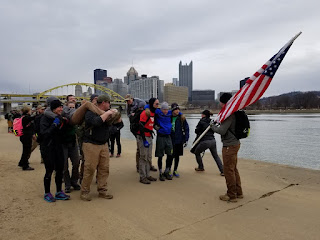 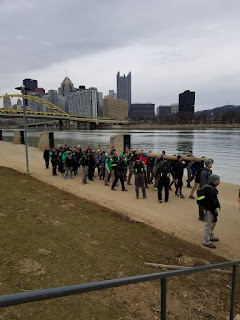 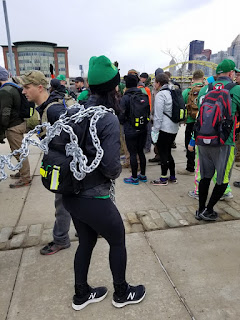 Once we arrived at Station Square we realized we couldn't go any further due to a blocked road, so we had to turn around.  But first we had another challenge, it was called Last Man Standing.  Basically you just hold your ruck overhead and whoever lasted the longest won.  I didn't go great myself, my ruck slipped out of my hand (should have taken my gloves off first), but our teammates were awesome!  Our friend Jennifer was 3rd to last female standing!  Impressive!
In the end, after 14 plus minutes of holding her ruck overhead, a GIRL won and earned the record for longest time.  (across all of GoRuck) 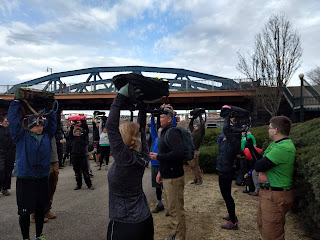 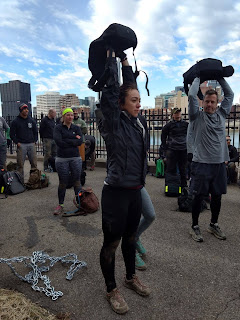 We headed back to our ending location, (where we started) and we lined up.  The event was over.  It last 5 hours and we had rucked 8 plus miles.  We were handed our patches for our accomplishment and we sang Happy Birthday to our friend Jennifer since it was her birthday that day and it was her first event too.  All of our new GRT's did amazing and I think they had some fun too! 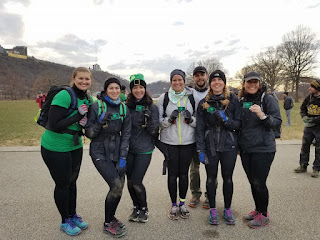 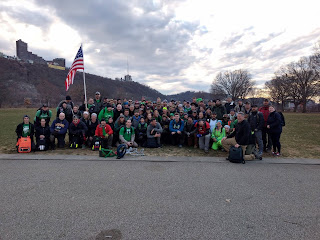 After the event was over it was posted on the event page that we had collected $903 for the Hannah Baldwin May Legacy fund, which will provide scholarships for kids to attend the Bell School of Irish Dance, which was Hannah's passion.  How awesome! 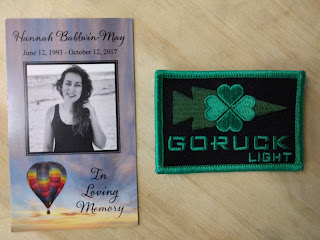