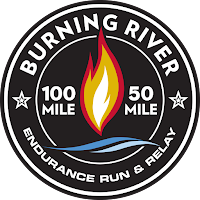 I chose to do the 100 mile solo event and this is my race review.  This was my first 100 mile ultra marathon.  Before this my longest race was the Oil Creek 100k.

We decided to travel out the night before and stay at the Cuyahoga Falls Sharaton Suites.  This was the location of the packet pickup and the finishline.  We knew we were in the right place when we started seeing signs for the BR100. 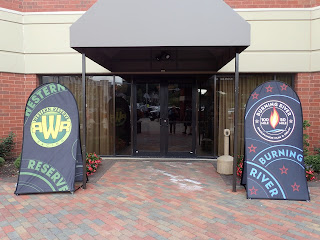 We arrived a few hours early and we were able to check in, so we walked around the hotel a little.  Off the back of the hotel you can see the falls. 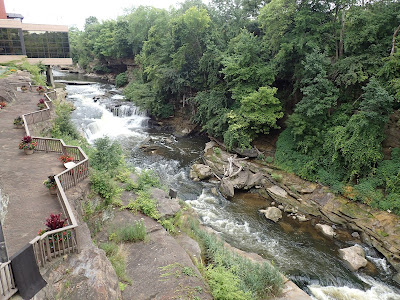 After walking around the hotel a little it was time for packet pickup to open, so we walked down and picked up my packet.  The packet pickup was very smooth. 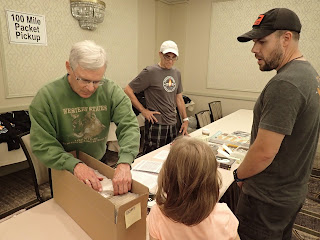 Western Reserves Racing also sells Crew shirts.  You can order them in different colors, so it is easy to spot your team/crew when you enter the aid stations.  They were picked up at packet pickup.  If you didn't order a specific color, you could buy a black one there. 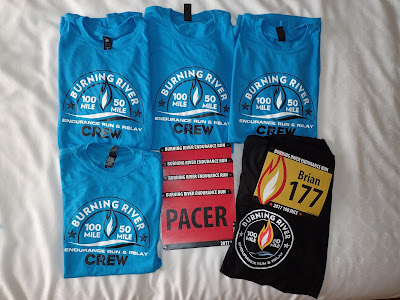 The shirts are all very good quality, and the long sleeve 100 miler tech shirt is the best I have gotten from any race.  We also picked up the pacer bibs for my crew/pacers, they each had to sign up online.  It is free for the pacers, but they needed to sign the online waiver.

A few hours later they held the first Rules Meeting in the lobby area outside of the packet pickup room.  At the meeting they went over the rules and answered any questions that runners had.  One thing that they stressed was they wanted to see people finish and they would try to do what they could to help the runners achieve that goal.  As far as the rules, they seemed pretty simple, stay on the course, if you get off course get back on at the same place, and do it under your own power. 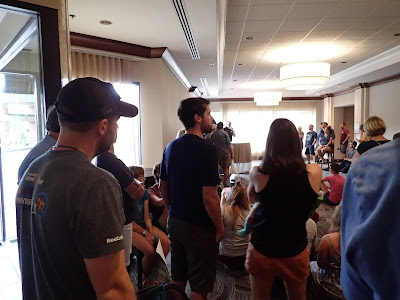 After the meeting I figured it might be a good idea to go get a little shut eye before morning.

The start point was at Squire's Castle. 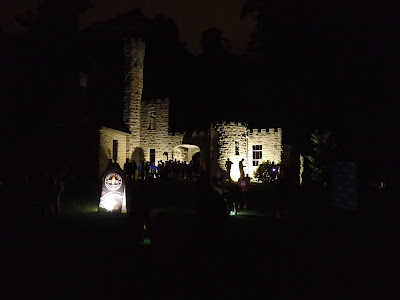 We were there a little early so we had a chance to walk around the castle for a little before the start of the race. 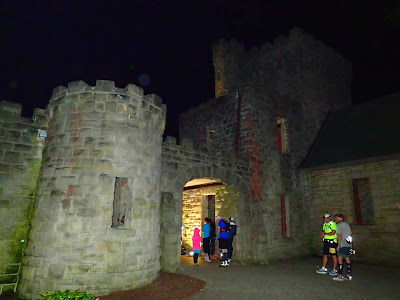 It was nice to have my daughter there to send me off on my journey. 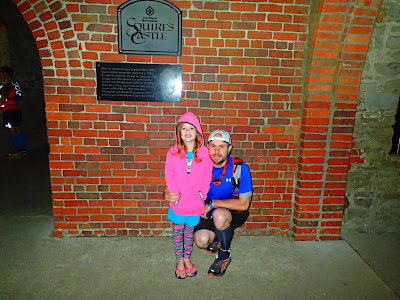 The race started at 4:00 a.m., in a field in front of the castle.  First the national anthem was sung and then they sent us off.

The first 11.5 miles was on the road, which worked well to spread everyone out.  The first aid station was 6.7 miles in.  This was a water only aid station on the side of the road.

The next aid station was Polo Fields, this was the first aid station that had crew access.  To this point I was making pretty good time, I knew I was going a little fast, but I thought it would be a good idea to get a few miles out of the way before the sun came out and it started to warm up. 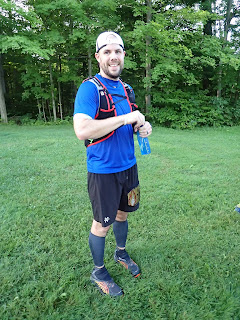 It was great to see my daughter at each of the crew aid stations.  I am so happy that I had such a great team supporting me.  I could have never done it without them. 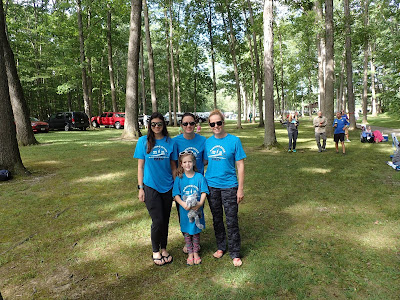 After this aid station we finally started to hit some trails.  The next section was Bridle/Horse Trails. Throughout the race the trails were a good combination of roads, bridle trails, crushed limestone, and single track.  Here is some video of the trails. (sorry it is so long, but you can skip through it.)

After getting through a few more aid stations, I finally got to the 50 mile point.  This is where I could start running with my pacers.  I was very happy about that as I know I was slowing down.

At Boston Mills I met with my crew, got some water and food and was back on the trail with my wife.  She would be pacing me for the next 16.5 miles. 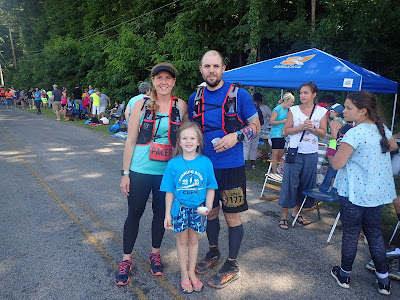 It was great to get back out on the trails with somebody that was fresh, and it was nice to have somebody to talk to.  I think it was great for them too, to get out and see the trails, and experience the ultra.  As it was said in the rules meeting, the pacers are runners too and had access to the aid stations and everything else the same as the runners, so it was a good way for them to try it out.

This section was pretty difficult, mainly one section that was a long gravel trail beside a road.  It was out in the open and the sun was beating on us.  When I got to the 2nd aid station I think I may have been getting a little nauseous, but after chugging a bunch of water I was feeling pretty good again.  After this section I started carrying an extra bottle in my pack so I had 3 instead of just 2.

The end of the section with my wife we started pushing a little quicker pace.  This was not due to time, but we didn't have our head lamps and it was getting dark pretty quick, especially in the woods.  Luckily we made it to the Ledges aid station before it was too dark. 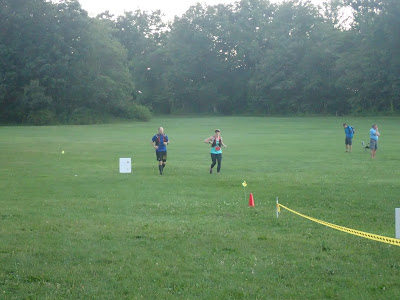 Next Sheena was up and we had 9.6 miles to cover.  We needed our head lamps as soon as we entered the woods.  The night was nice and cool, you could even see your breath in a few places.

The aid stations are some of the best, and helped everyone keep going throughout the night. 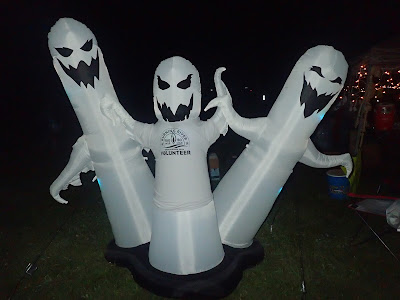 The volunteers are amazing, and extremely helpful, always ready to help out when you enter the aid stations. 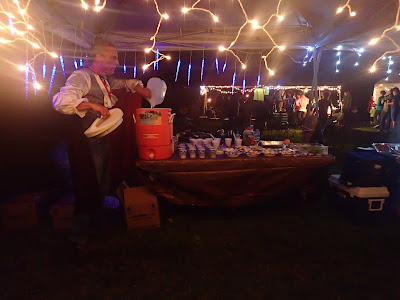 After a few more miles of hills and technical trails, we were looped back to Pine Hollow Aid station.  Here is were I picked up Kathy to help me through the next 16.1 miles.  This was one of the few times I sat down for a minute.  It was nice but even after just a few minutes the stiffness starts to set in a little.  Best just to keep moving. 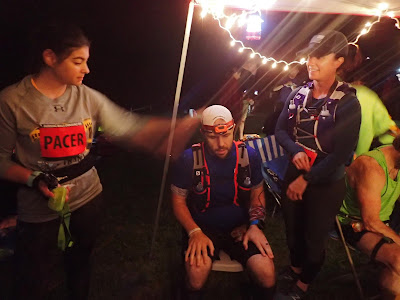 At this point I may have been thinking what the heck am I doing, but there was no time for that and we had to get back on the trail.

Even moving through the trails at night, they were marked very well.  I think you would have had to try very hard to get off course.

These sections were mostly trail, with hills, and more roots and rocks.  Just an FYI, Ohio is not flat; there seems to be a never ending supply of small rolling hills.  (The last 9.6 miles really messed with me)

From Botzum  Parking aid station to Memorial Parkway aid station you travel down the Ohio & Erie Canal Towpath Trail.  This was fairly flat, and I believe it was hard packed crushed limestone, but my memory was a little foggy at this point.  Regardless, with Sheena's help we were able to make good time on this section.

When I made it to the final aid station, Memorial Parkway, I met up with my wife and she finished off the last 4.2 miles with me.

Now back to how the last 9.6 miles mess with you.  When following the Ohio & Erie Canal Towpath Trail for 5.4 miles, I just kept thinking this is great, a nice easy stroll to the finish line.  I was quite wrong.  After leaving Memorial Parkway aid station, we started up the road with a nice sized hill.  After a little we were back on the trails with more hills.  There were even quite a few stairs over the final hills.  At this point stairs were not my friend.  I think the final 4.2 miles were designed to figure out how much you really wanted it.

Once we got off the trail we started up the hill on the streets and sidewalks toward the finish by HiHo Brewing Company in Cuyahoga Falls. 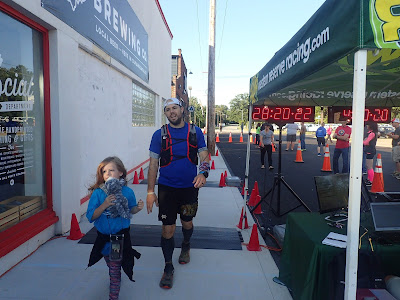 It was great to be able to cross the finish line with my daughter. 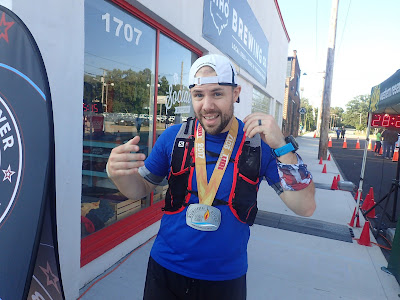 After finishing I could see the hotel down the road a little, but I was very happy that my crew had the car parked close.  I was happy to take a ride the last block or so. 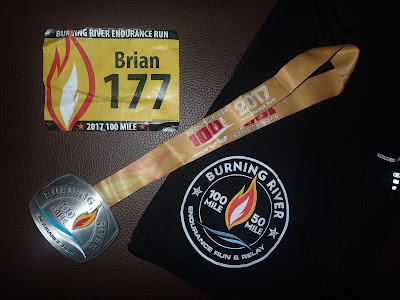 In conclusion, this is a great race, very organized and well planned out.  I would highly recommend it to anyone, there are also a lot of options if you don't quite feel up to 100 miles.

I would also like to say again, that if you plan to do a race like this and you can have pacers and a crew, do it.  It will make the time much more enjoyable.

Thanks again Jessica, Sheena, Kathy, and Emma.  They didn't get much sleep and were always there when I needed them.  Thanks again!!

Here is some of the gear that I used.

Posted by Brian Gardner at 5:49 PM