Ragnar Trail Appalachians was held at Big Bear Lake Camplands in West Virginia.  This was our second year doing Ragnar Trail at this location.  This year I joined an Ultra team with 4 friends, and we also had a second team of 8.

We traveled to Big Bear Lake Camplands on Thursday, the night before the race.  We arrived a few minutes before they started letting people into the camping area so they held everybody in a parking lot.  In the parking lot they came around and charged each car $20 for parking.  The previous year there was no charge for parking, so I was surprised that they started charging for parking and how much they charged, it seemed a little steep.  There were quite a few people so we sat in traffic for about 30 minutes before we got to the check in point.

At the check in point we gave our team name "Fit N Fun Life" and they gave us a parking pass.  Each team got one parking pass to park on site, and other vehicles had to park in a lot outside of the campground and had to catch the shuttle to get to the camp sites.

First we found where we wanted to set up our campsite, and started setting up our canopy and tents. 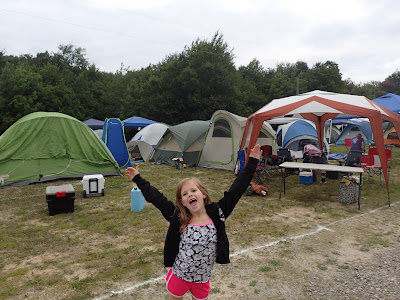 My daughter was pretty happy we were done setting up, because it took awhile!

We also held a few extra sites for a few of our friend's teams.  It is a good thing we got there early, if not it would have been difficult to get multiple sites together.

After getting the campsite setup I walked down to the village to get checked in.  First you have to watch a safety video before they will let you check your team in. The video process is pretty quick and painless, followed by a hand stamp to show I watched the video.  Now I was able go and check in.  I checked in my "Fit N Fun Life" team, and received our bib "number 4".  They gave us our goody bag, meal tickets, and tickets to pick up our shirts.  The goody bag contained our bib belt, a bunch of Kind Bars, Hot Shots, ttickers, and temporary tattoos.

After getting both teams checked in we headed back to the campsite to get some shuteye before the next day.  That ended up being a pretty good idea seeing as you don't get much sleep during the race.

Our Ultra team didn't get to start until 1:00 pm.  I was the first to go, and we decided to do two loops each time.  My first run was the Green Loop and the Yellow Loop.  So I entered the transition area and got my Green band.  Then off we went. 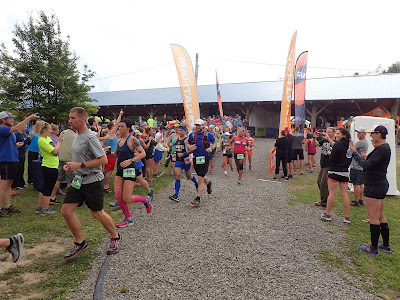 The Green Loop is the shortest, around 3.5 miles.  There are a few small hills but it is pretty technical in the beginning, with lots of rocks.  This is a fun loop in the day light, but a little tougher at night. 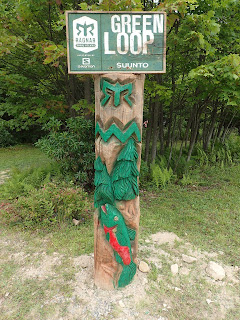 For my second loop as an Ultra Team I passed through the transition area only slowing down to switch my band from my Green to the Yellow band and headed back out on the trail.

The Yellow trail is my favorite, it is definitely the most scenic.  It is approximately 4.5 miles long.  Last year I ran it in the dark, so this year it was great to see in the light.  The trail winds through a pine field. 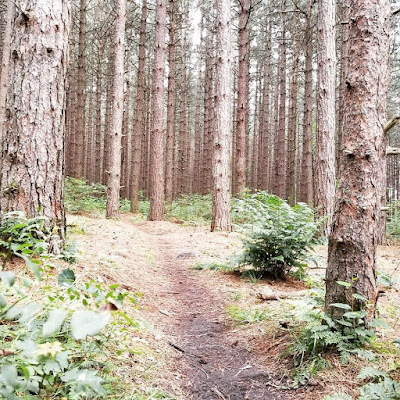 After finishing the Yellow Loop I handed the Bib off to my teammate and he headed back out to do the Red Loop then the Green Loop. 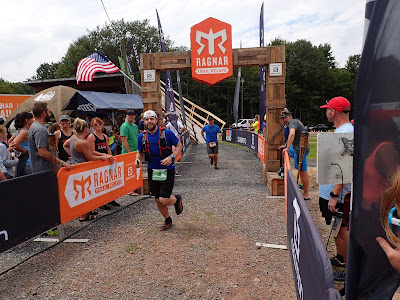 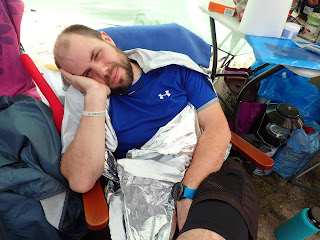 I know I am very photogenic when trying to sleep.

After a little break it was time to get ready to go back out, my next lap would be Red into Green.  When I went back out for Red it was starting to get a little darker in the woods, so I decided maybe I should take my head lamp. 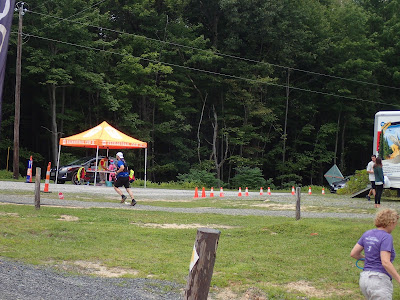 I was able to get through most of the Red Loop before I needed the head lamp.  The Red Loop has a few larger hills and takes a little longer.  It is about 6.5 miles.

After finishing up the the Red Loop I continued onto the Green Loop, it was definitely more difficult in the dark.

After finishing the Green Loop and handing off my bib, I headed back to camp to get some food and take a little rest.  As for food they had pizza all night that could be purchased and they gave each of us a ticket for a free meal.  We packed mostly cold cuts and PBJ. 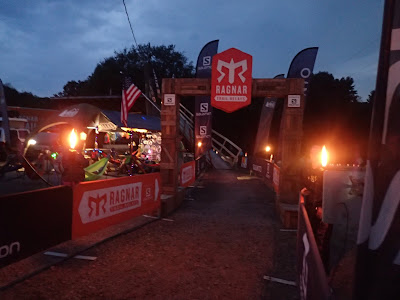 When I got back to the village, they had s'mores and movies playing on the side of a truck trailer.  They also had places to sit in EMO hammocks, lounge chairs and gear setup by REI.

Next would be my two longest loops, Yellow into the Red Loop.  This took me through most of the night and it started getting light as I finished up my Red Loop.  After coming back to the transition tent I handed off my bib, and I was finished.  Now all I had to do is wait for my team to finish up.

After our last runner finished up we walked over and picked up our medals. 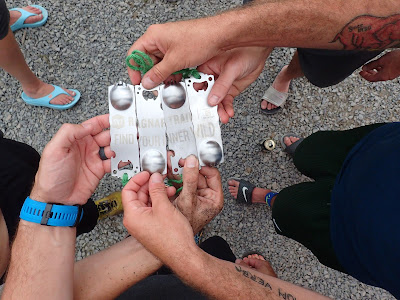 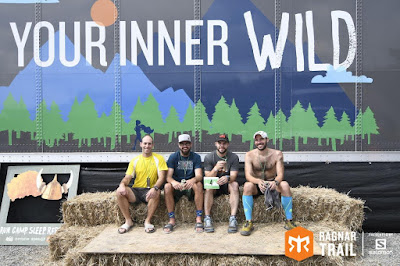 After finishing they have a photographer taking photos.  Then we went back to the camp site and started taking everything down and waiting for our other team to finish up.

I love the Ragnar races, they are some of the most complicated races out there.  But the relay setup is so organized and thought out that it goes very smoothly.  The staff is amazing and 8 person teams each have to have a member volunteer for a few hours during the race, so lots of the volunteers are racers too.

I highly recommend these races, they are different than a lot of the other races out there.  It is a great family event, and a great place to hang out with your friends.  Because it is a loop course you always come back to the village, and get to go to your camp site between loops. 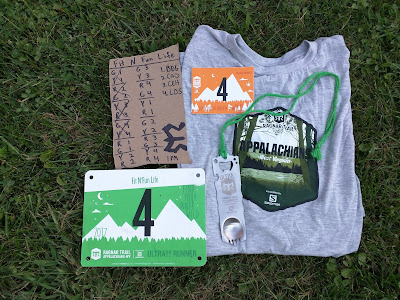 After getting home and looking at the results, I found out that we placed 3rd in our division (Open Male).  This was mainly due to my teammates, they were extremely fast.  They even made up for me going a little slower due to a previous race I was still recovering from.

Here is some of the gear that I used.

Posted by Brian Gardner at 4:26 PM