On June 2nd my husband, daughter, a friend and myself headed 4 1/2 hours to Infinity Downs in Arrington, VA for the Spartan Super.  We stayed at a hotel about 40 minutes away, so we got up pretty early Saturday morning to be there for our 8:30 competitive heat.  Usually I run in the competitive wave because, well, I'm competitive.  This time, I was hoping to get done early and be on my way.  Afterall, it was my daughter's 7th birthday the day of the race.

I was a little nervous about this Super, since it was not far from Wintergreen, which is a tough race.  I was afraid that I would struggle with the terrain if it was anything like the Wintergreen Super.  We entered the Infinity Downs parking lot and were pleasantly surprised that we could park right outside of the venue.  It was $10 and it was fantastic!  It was so close, that we could easily run out to our vehicle if necessary.

So we headed over the to the start once we got our band and jumped over the wall like we always do. 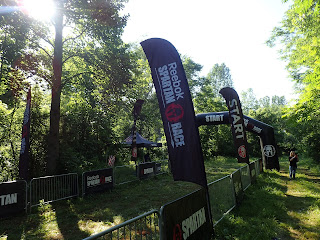 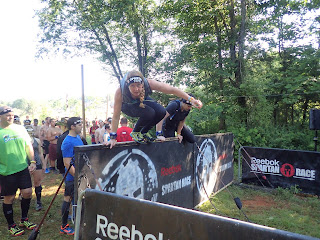 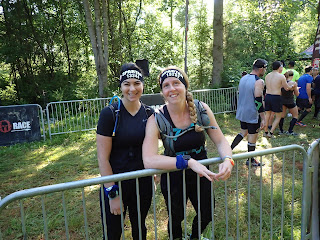 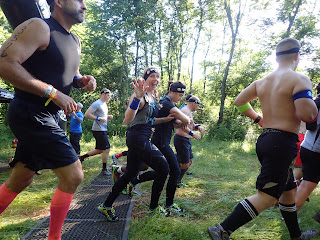 And we are off!

We started out up a slight hill and boom, there was our first obstacle.  They were the largest hay bales I had ever seen.  They were 3 across and covered in plastic.  I watched many people take a run at them and simple slide off the plastic on the the ground.  There was no real place to grip onto them and they were easily over 5 feet tall.  It took me 2 tries, but I made it over.  Not far from there was the diamond shaped rib crusher.  I'm pretty sure there is a technical name for it, but that's what I'm calling it.  There were 2 of them in a row.  It was a long diamond shaped log that was about 5 feet from the ground and you had to jump over it.  The first one I went over felt like it knocked the wind out of me.  The 2nd time I tried to keep my ribs from hitting the log.
Next up was several 6 foot walls in a row, followed by Over-Under-Through.  They don't require much work.  Then we had some serious running; low grass, high grass, open fields, and in the woods.  The terrain was beautiful.  A few times my friend and I just stopped to take in the scenery.  I couldn't believe how flat this course was!  I was dreading the terrain, just based on what I had heard about Wintergreen, but this was nothing like that.  It was awesome.  It was definitely a runners' course.  Normally, I would be excited about that, but I had just found out 3 days before that I had walking pneumonia, so I struggled with the running part.

We had a few more typical Spartan obstacles, one including 3 barbed wire crawls in a row.  They were each pretty long too.  Next was the herc hoist (hoist a sandbag up using a pulley, touch the top and slowly lower it down).  That was easy as usual.  Next up was the atlas stone carry, where you carry a large atlas stone about 20 feet, drop it, do 5 burpees and carry it back.  Then we had the plate drag.  You basically just pull a weighted plate attached to a rope up a slight incline until it touches the metal stake in the ground, then you drag it back down with your hands to return it to the bottom.

Between miles 3 and 4 we ran in and out of the woods, up some small hills here and there, but no major elevation was seen.  We tackled the inverted wall, the z-wall.  The inverted wall is just as it sounds, a large wall that is angled about 75 degrees and you climb up from the side that is angled.  There are small 2x4's for you to put your legs on once you get ahold of the top to pull yourself over.  The Z-wall is another animal and takes out many Spartan racers.  Imagine three 6 foot walls about 7 feet in length screwed together to make the "Z" shape.  You step up to get on the wall with little wooden planks about an inch wide and 8" long that are screwed into the wall for footholds.  They have hand and foot holds stretched throughout each wall that you must hang on to get to the next wall.  Once you get the first wall you turn a blind corner trying to find the hand and foot holds to the next wall.  Then you make that wall, only to figure out how to make the corner (at top of the Z) without falling off.  Then you get to the end of the 3rd wall and you ring the bell.  I use to fail this obstacle when I first started doing Spartan races 2 years ago, but now I got it down.  The key is to keep your pelvis tight to the wall and maintain hand grip strength.  It also helped that this course was dry, so it was much easier to hang on!

Next up was the bender.  It's a newer obstacle.  I think it's pretty cool.  It's looks like a really wide set of monkey bars that go straight up in the air.  You need to be able to get on them to climb to the top, to go over the other side.  The difficulty lies in two places, getting on it to start, and transitioning at the top to climb over the other side to get down.  I succeeded.  The We climbed an 8' wall in mile 5 and then we came to the monkey bars.  They were the metal monkey bars we usual see at a Spartan race.  I zipped through those and then came upon THE MUDDIEST rolling hills of mud I had ever seen at a Spartan race.  They were so wet and so slick that people were just sliding all over the place.  I would watch someone attempt to climb up and immediately come sliding back down into the muddy water.  There wasn't a good place to get a hand or foot hold at all.  My friend and I kept sliding and I said to her that I better not have to burpee in the mud pit!  We ended finding a small spot off to the side that allowed for a little more traction.  It was the only way we were completing that obstacle!  We got to the end and there was the dunk wall.  Ugh. 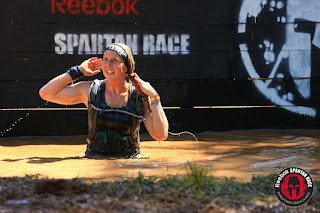 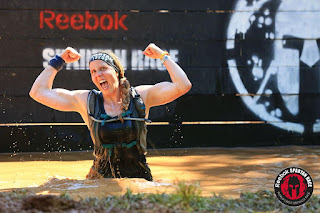 These are never very flattering! (why not make them fun?)

As we heading towards mile 7, we climbed the A-frame cargo net and of course completed the bucket brigade.  The climb really wasn't bad at all.  There weren't any terrible hills and it wasn't super long either. 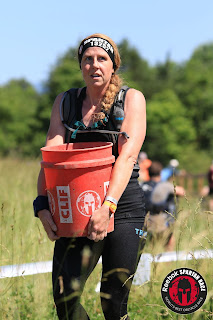 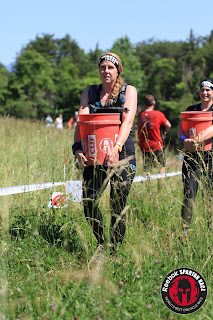 As you can see we walked through some pretty tall grass.

We made it to mile 7 and still no major hills.  There were a handful of steep climbs, but nothing that I would say was terribly taxing.  We walked up over a hill to see the multi-rig.  This is usually 80/20 for me.  It just depends how difficult it is.  This time it was ALL rings.  WHAAATTT!!  I was so happy.  I KNEW I could do that. 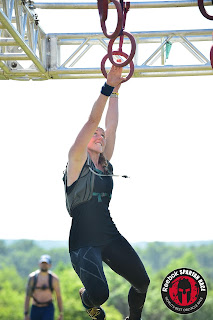 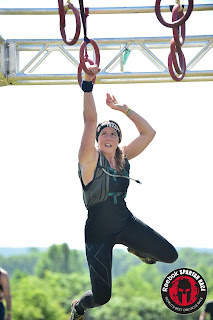 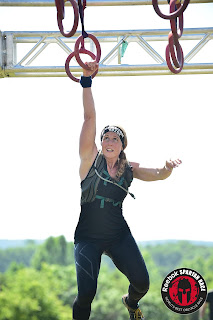 I was 7 miles into this race and I had yet to fail an obstacle.  Here I thought today was going to be awful and it turned out pretty good.

Next up was the Olympus.  It's a fairly new obstacle and I had only seen it once before in OH and I had failed it.  It's 4 longer walls all together at an angle.  You step up and need to grip either the circle shaped cut outs, the chains, or the grips on the wall.  It's important to keep your legs up and tucked in as much as possible to avoid sliding down the wall.  This time I decided to use just the circle cut outs and move as fast I possibly could.  Each wall that I made it, I couldn't believe it.  It feels like it goes on forever, even though only a few minutes go by.  I made it!  Ringing that bell felt sooo good.  I was feeling good and I made it down over the hill and there was the rope climb.  I've only ever failed this once, and I was on such a roll that I told myself I wasn't failing it today.  And I didn't!  8 miles in and I knew it was over soon.

THEN comes my arch nemesis, the spear throw!!!  I had just nailed it 2 weeks earlier in OH, so I felt pretty good.  Instead of taking my time to set up and prepare I just through it kind of haphazardly and of course I missed it!!   I was so mad.  I had made it so far without failing an obstacle, that was it was a bit hard to swallow this failure.  But I sucked it up and did my 30 burpees as fast as humanly possible.

We were almost at the end.  Only a half of a mile to go.  A little more running in the fields and woods and we were heading into the festival area for the last 3 obstacles.  At this point I see my husband and daughter as I make my way to the dreaded Twister.  This is a new obstacle and I've seen sooo many fail it so many times.  I made it a little more than a 1/4 of the way through this one at OH, so I was hoping to get further this time. 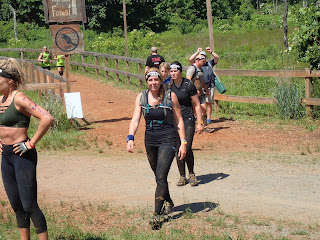 This obstacle is a long, and I mean long, metal bar with square handles that go around the bar as you rotate it.  Meaning, every time you move to the next handle, the entire bar makes a small rotation as you are moving.  The challenge is that it's moving and there are also 3 transition points where you go from a rotating bar to a solid support beam with no handles.  Then more handles.  I worked tirelessly trying to complete this obstacle. 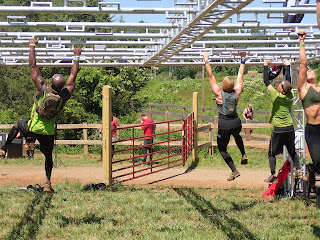 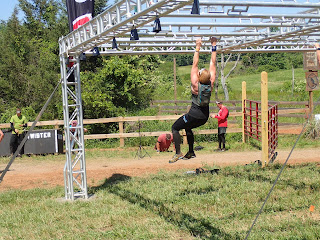 So close!!
I needed just one more handle to be able to reach out and touch that bell.  I was just a couple from the end.  I was frustrated, but I was off to do my 30 burpees.

My husband is usually pretty good at capturing these for me!  Thanks Brian! 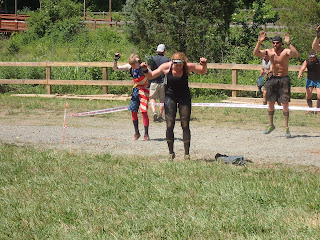 I realized when I started doing my burpees that I had torn the calluses from both hands doing the twister obstacle.  I was bleeding and it the skin was hanging from my hand.  At this point, I still have the slip wall to complete right after my burpees.  Each time I went to the ground, I would bleed a little more.  The grass was sticking to my hands and boy did they hurt.  Too bad!  I had to grab the rope to climb up the slip wall now.  I sucked it up because I knew it was almost over. 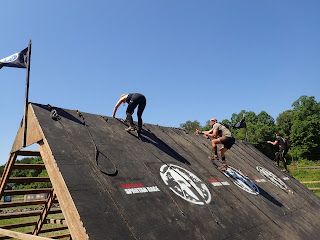 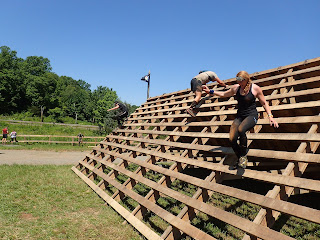 Down the other side and to the fire jump! 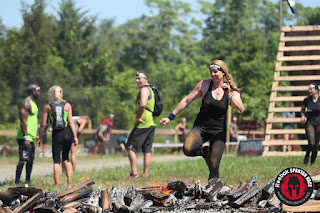 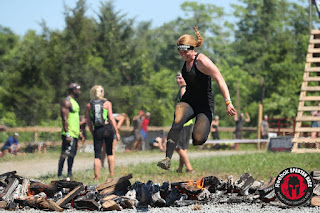 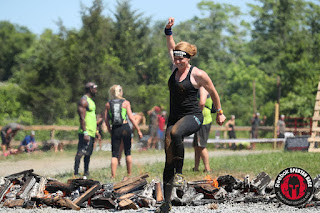 I was happy it was over, but I was also excited to have ran it.  (even not being able to breathe)
It was a lot of fun and the terrain was relatively easy for a Spartan race, especially a Super.  I would absolutely do this one again.  We had a blast! 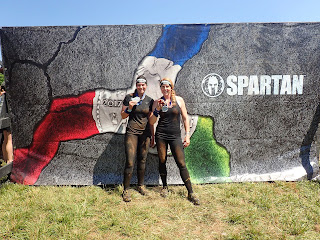 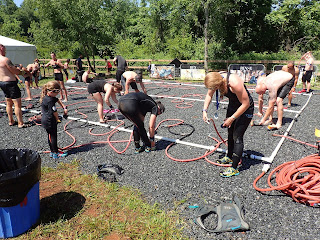 Time to clean off and go home.  (except for a quick stop by the medic tent to bandage those hands)

Until next time, Spartan! 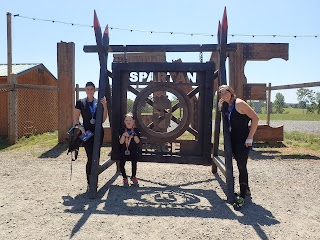