Two weeks after running the half marathon, I decided to take on the Spartan Ohio Beast OCR.  (because, why not?)  I ran the course last year after running a full marathon, so I thought I would be ok.  The race was held at The Wilds in Cumberland, OH.  It's a wild life animal park.  However, I believe the race is set up on their property, but not actually in the park itself.

I ran with a friend so we had no specific plans.  We just wanted to cruise through the course and do our best without pushing ourselves too much, having just recovered from the half.  We jumped in the corral for our heat that started at 8:45.  We chose to run competitive, because we like the challenge of doing the 30 burpees at each failed obstacle (it's what makes us a real Spartan).  We don't LIKE to do them, but we do them! 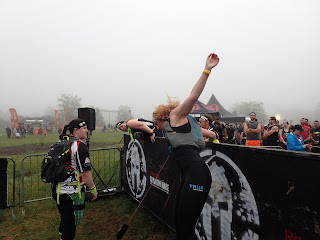 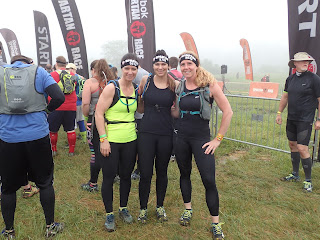 We heard the typical Spartan speech where everyone chants "I am Spartan" and "AROO, AROO, AROO!"  Then we took off.  We started out running up a small hill and through some tall grass.  The course was already pretty muddy, even in the grass.  Our first obstacle was a wall.  A few obstacles in was Over-Under-Through, which was really very muddy.  Crawling under pretty much covered my entire front with mud.

We next hit a few of the typical Spartan obstacles like barbed wire crawl (twice), the 8' wall, and plate drag.  The crawls were a decent length, not as long as some I've experienced, but there were 2 of them.  The 8' wall is the exactly as it sounds.  Run and jump and grab the top to pull yourself over.  The plate drag was a metal sled attached to a rope that you pull towards the stake in the ground at your feet.  It was a relatively easy obstacle.

A "classified" obstacle was the Bender (which I had never seen before, it's new for this season).  It was actually really cool I thought.  It looks almost like someone took a wide metal ladder and bent it 45 degrees.  You had to climb up the one side and down over the other.  It was wet and muddy and a little tricky, but once you got on it, you had to figure out how to get OVER the top.  I saw lots of people freak out on this one.  I thought it was awesome!

As we made our way about half way through the course we were smacked with 4 upper body obstacles in a row.  All of the mud and running that we did the first 3 miles was slowing down.  It was time to hit us with some tough obstacles.  First was tyrolean traverse.  This is a long rope that you traverse upside down hanging by your feet and hands until you reach the bell at the end.  My arms were getting tired towards the end, and slamming the back of knees down on the rope was tearing up my legs.  I couldn't wait to be done.  I made it through and rung the bell.  Next up was the rope climb.  It was literally right next to the traverse.  The ropes were a little wet and muddy from the previous participants trying to climb them.  I managed to use the over/under foot hold approach that makes it much easier to attack this obstacle.  I went up and hit that bell too!   Right around the corner the sandbag carry was waiting for us.  They had new bags this time.  They usually have the sandbag "patty" type bags.  These bags were long and looked similar to a "Wreck" bag.  It was actually nicer as far as comfort goes.  The trek was short, down and up a small hill.  I couldn't believe it was over!  We ran a little past the bags and were on to the herc hoist.  I usually do ok with this obstacle, but last year at the Beast I failed it.  I had no strength left in me at the end of the race, which is where they put it.  This time, I had no problems at all.  As a matter of fact, my friend and I overhead a conversation between a competitor and the staff.  He was using the women's hoist (which is lighter) and he was told he wasn't allowed.  He said that he couldn't lift the men's, it was too heavy, so he wanted to use the women's.  They told him he would have to do take the 30 burpee penalty if he couldn't hoist the men's bag up.  He was not happy!  It just cracks me up, people that are running the competitive heat and they want a modification because they can't do something.  DO THE BURPEES!  (like the rest of us!) 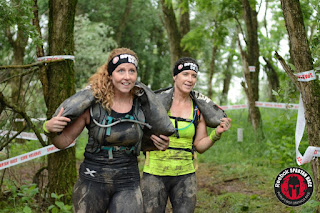 After completing taxing our upper body with several obstacles within in walking distance of each other, we starting back into the woods for some trail running!  This was the muddiest Spartan Race that I think I have every ran.  We passed through bucket brigade, spear throw and atlas carry.  Bucket brigade was short and not steep at all.  It was definitely one of the easiest I've done.  Spear throw is my nemesis and I'm 50/50 for getting it at races.  This time it couldn't have been more perfect!  I nailed it!  I was so happy, I jumped in the air and swore like a sailor!  We ran up a ways and completed the atlas carry, 5 burpees and carried it back to the starting position.

One of the "classified" obstacles was the new Twister obstacle.  It's a rotating metal hand hold that moves as you grab the next handle.  I made it through the entire first section and fell 3 hand holds in on the second section.  It was really tough.

After more running in the woods, on slick mud, rocks and roots we came up the the inverted walls and the dunk wall.  The inverted wall is just and angled wall that you have to jump and grab and pull yourself up.  Obviously the difficulty is that it's angled so it's a bit more difficult that the traditional walls.  At this point, we came across the dunk wall.  The wall was really deep in the water, so you had to REALLY dunk under to get to the other side. 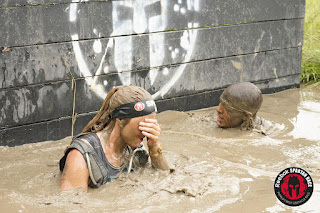 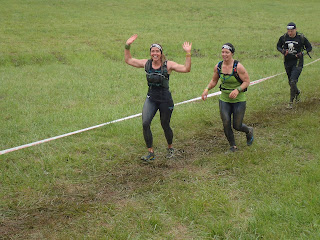 As you can see, it was really muddy.  I don't recall dunking in water that dark before!

Somewhere along the line we climbed the cargo net, A-frame, stairway, z-wall, and had to repeat the memory test.  I liked all of these.  I slipped on the z-wall and had to burpee, so I was mad about that.  I'm 50/50 with that obstacle too.  I need to work on grip strength.  I say it every time! 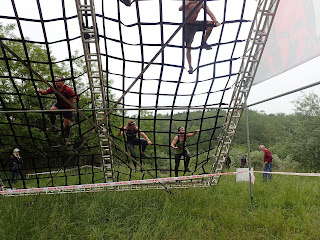 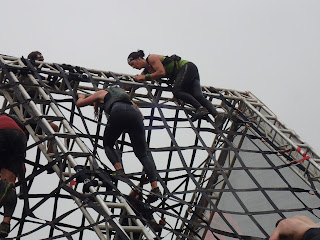 The last obstacles were the hardest.  We came up over the hill to the Multil Rig.  I have made this on several occasions and once I saw the layout, I was pretty confident this time too.  I reached out to grab the first ring and it was covered in mud and water.  I swung and was able to make it to the third ring and then I slipped. 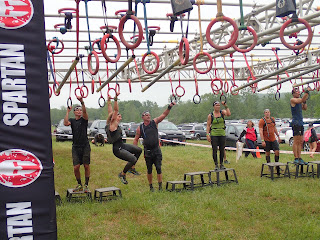 Burpees for me!!!  (I think my husband loved getting these pictures) 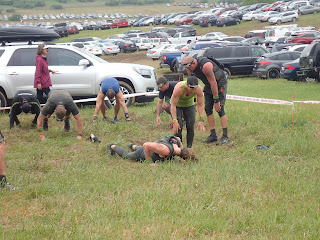 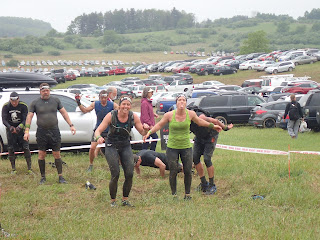 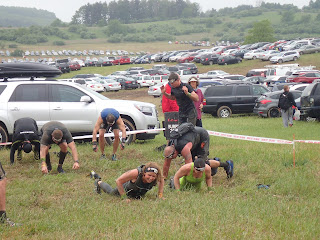 The new Olympus wall was angled and had you had the option of chains, round cut out holes or rock climbing type grips to get across it.  I didn't even make it half way.  It was really long too.  My friend did really well, but didn't make it either.  Burpees again! 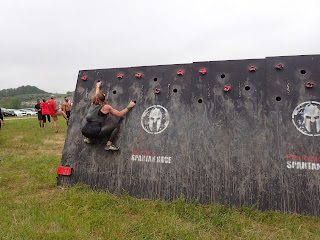 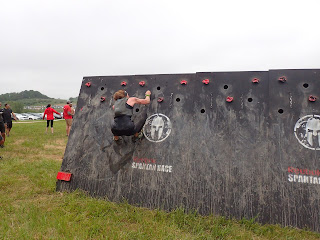 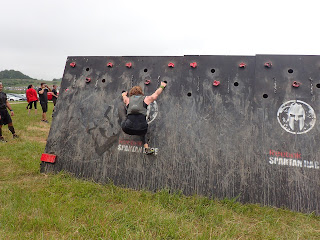 You can see where I started to lose my grip.  My hand slipped out of the round hole and that was it!

After my burbees I prepared myself for my fire jump, because really, that's the best part!  It's over and the fire jump pictures are usually pretty epic! 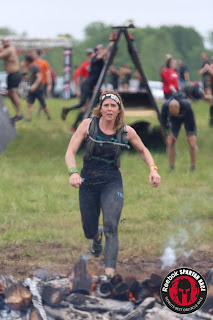 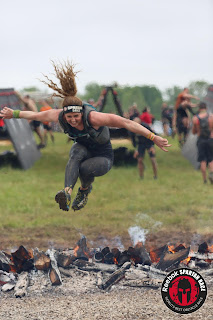 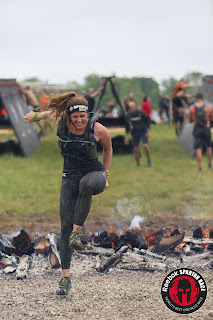 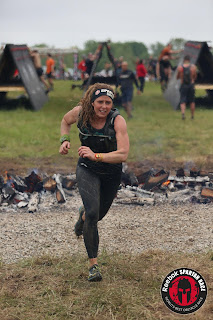 Well, it was over.  All in all, I didn't feel too bad.  I thought the terrain wasn't bad, just really muddy.  Compared to the 2016 Beast, it seemed flatter, but way muddier.  The total distance was right around 13 miles.  The obstacles were harder this year than the terrain.  I managed to have a lot of fun running it! 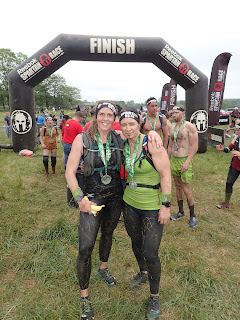