The Pittsburgh marathon was held on May 7, 2017.  This year I chose to run the 5k on Saturday and the half marathon on Sunday.  I like the challenge of pushing a littler harder Saturday and seeing what I have left in me for Sunday's half.  Plus you get a 3rd medal because you ran both back to back.  That's enough convincing for me!

The first thing we did was stop by the marathon expo on Friday night to pick up our packets for both races.  You needed to have your bib # and license to get your packet.  I was picking up for a friend too and I just needed a form filled out by her and to show MY license.  The process was actually pretty simple.  We got our shirts and goodie bags and went on our way.  We walked around the expo and checked out the vendors.  Friday night I had my gait analysis done by Brooks and it was pretty cool.  They attached sensors to your knee, calf and heel and had me run on the treadmill.  (Brian and my friend had it done the next day) 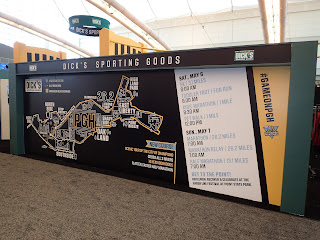 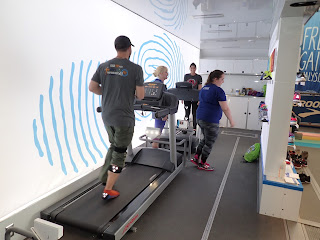 We walked A LOT at the expo.  I found my name on the wall of runners which is always cool to see.  I was listed twice since I was running both races.  There were lots of things to see at the expo. 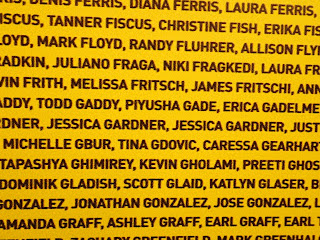 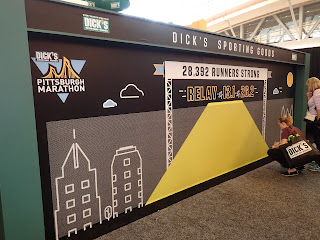 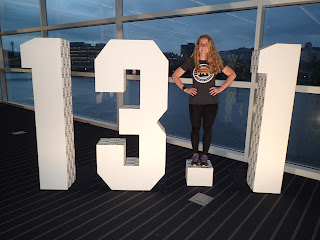 This year I was chosen by UPMC Healthplan for a campaign called "What a Runner looks like."  A collection of pictures of the 30 featured runners were on a wall outside the expo.  It was pretty cool to be a part of this campaign. 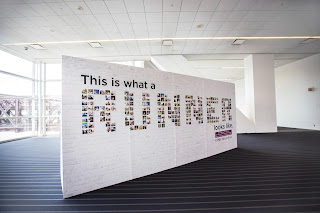 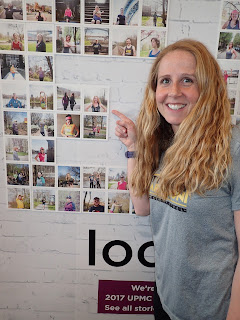 Just remember you will be doing a lot of walking at the expo, so if you want fresh legs for the race, maybe only go for a little bit.

The next morning was the 5k and the Kids Marathon.  We walked out of our hotel and around the back by PNC Park for the start of the 5k.  The weather was not our friend this day.  It was cold, raining, and windy out.  I knew it wasn't going to be my best race, but I told myself to just do my best.  We lined up with the pacer that we wanted to follow, sang the national anthem, and then we were off!  The 5k course isn't too bad.  It's mostly flat, except for a small incline near the end of the race.  The windy was whipping and I almost lost my hat several times, but I crossed the finish line, got my medal, and cooled down.  I checked my official time, only to find out it was the exact same time that I had gotten the year before!!  Way to be consistent I guess! 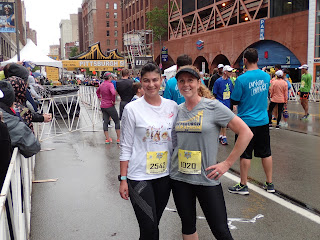 We walked back to the same start for the kids marathon and my husband and daughter got in line for their heat to start.  We waved them off and then ran over to the finish line almost a mile away.  It was pretty cool because the kids got to finish the same place that we did for the 5k and marathon.  My daughter run somewhere between an 11 and 12 minute mile, which I thought was pretty good! 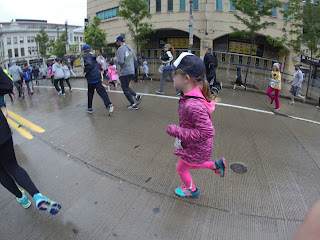 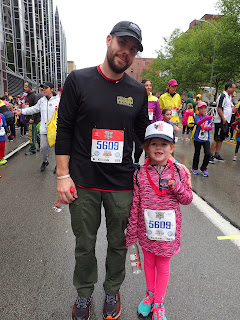 Once both races were over we went to eat lunch, then back to the hotel to rest.  (well Emma wanted to swim at the hotel)  Then we went back to the expo to look around again and meet up with some of our friends.  Another day of walking and walking and more walking, but we had fun!
The next morning we woke up around 4:45 so I would have time to eat my prerun bagel and tea before we had to head over to the corrals.  We stayed in the North Shore right by PNC Park, so we had almost a mile walk to the start line.  (which was a nice warm up for us)  It was pretty chilly out, but at least it wasn't raining.  After we waited in a long line to use the port-a-johns near the start, we got into our corral.  I found the rest of my group and we stood there, anxious as can be, waiting for the gun to go off. 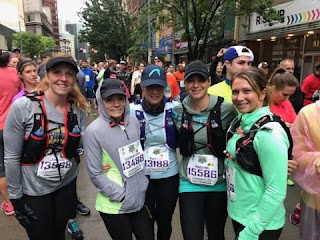 Finally, our corral is heading to the start.  We move up and once the gun fires we are off!  Of course just like any race it's a bit congested for the first mile at least.  This year I ran with a first timer so we planned to stay together during the run, so we weren't in a big hurry.  We ran and talked for most of our run.  Of course we laughed at some of the hilarious signs that the crowd had.  Pittsburgh is known for their phenomenal crowd support at this race, and they didn't let us down!
This year they advertised the half as being a "flatter" course.  The beginning was not bad, it was pretty flat.  We cruised through mile 5 in the North Shore, where my husband and daughter were waiting to cheer us on. 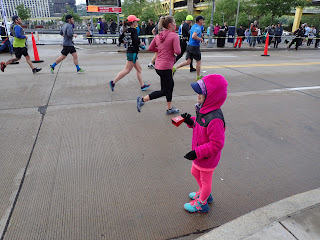 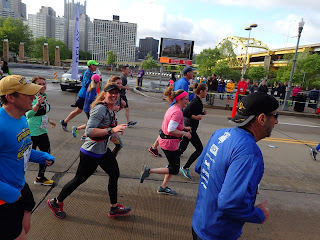 The West End Bridge always seems to drag on for me, so at mile 7 I was getting a little bored.  By mile 10 my legs started to feel tired, but the crowd was pumped up, so I tried to use that energy to keep me going.  When I got to mile 11 over the Birmingham Bridge, I thought "Why didn't they cut THIS part of the course."  Haha.  It was the same long incline they have had each year.  Ugh.  Once I saw mile marker 12 I knew I only had a little over a mile to go.  I pushed a little again in mile 13 and I helped get my friend to the finish line.  She was happy and overwhelmed and I was so glad that she pushed through, even when her brain told her otherwise.  (Way to go, Liz!!) 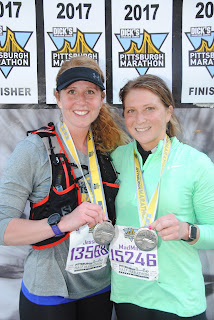 I finished my half in 2:01 this year, which was 26 minutes faster than I ran it 2 years ago.  I was pretty happy with my time and I felt great after running it too.  I totally forgot to ring the Geico PR bell though.  Oh well, next time!  I stopped by the Runner of Steel tent and picked up my Runner of Steel medal.  If you ran the 5k and the half or full the next day, you got a 3rd medal.  Yes!!  My weekend was over.  It was fun and exciting and I'm glad that I did it! 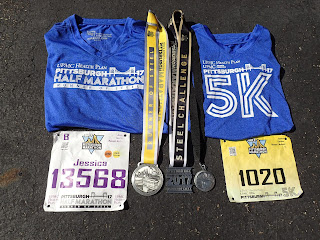